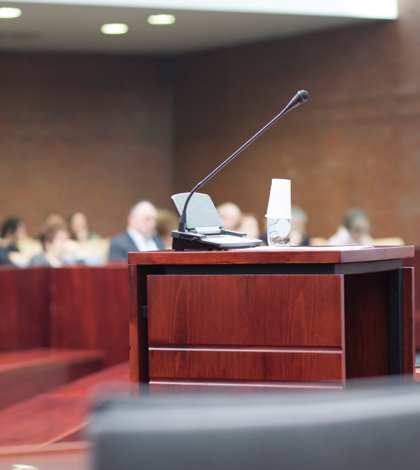 Two felony counts against a pair of defendants in the Colonies Crossroads corruption trial were dismissed this week.

San Bernardino County Superior Court Judge Michael A. Smith on Thursday threw out a forgery charge against Jim Erwin, former assistant assessor with the county and one of four defendants in the case.

Smith let stand one charge of failing to file a tax return for 2008 and two charges of perjury. The perjury charges were filed in connection with Erwin’s alleged failure to report gifts he received while he was assistant assessor.

On Wednesday, Smith dismissed a bribery charge against Mark Kirk, former chief of staff to one-time county Supervisors Gary Ovitt. Smith did leave in place charges of conflict of interest and  trying to improperly influence a public official.

The trial, which began early this year, is being prosecuted by the county District Attorney’s office and the state Attorney General’s office. Erwin, Biane and Kirk are accused of accepting $100,000 in bribes from Burum in order to facilitate the development of the Colonies Crossroads retail and residential development in Upland.

Burum was a co-partner in the development of that  434-acre project, which is next to the Foothill Freeway. Prosecutors maintain Burum’s payments to his three co-defendants – the alleged bribes, which were made after the issue was settled  – were disguised as political contributions made to get a favorable ruling out of the board of supervisors.

All four men deny any wrongdoing and say the charges against them are politically motivated.

The jury instruction and motion to dismiss hearings are scheduled to resume Monday. Defense attorneys are expected to begin presenting their case Wednesday.