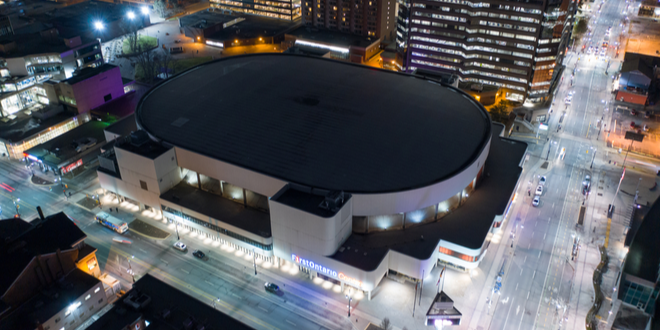 Shut down for 15 months, two of Ontario’s biggest revenue generators appear to be on the road to recovery, but only after making some tough decisions in order to remain viable.  Michael Krouse, president, and chief executive officer of the Greater Ontario Convention & Visitors Bureau, and Sue Oxarart, the bureau’s director of marketing and communications, spoke with iebusnessdaily.com last week about how they managed to weather the storm, and what might lie ahead for the Ontario Convention Center and Toyota Arena.

Q: Both venues, Toyota Arena and the Ontario Convention Center reopened June 15 after the state lifted the limits it placed on large public gatherings. How have they performed since then?

Michael Krouse: The arena has come back strong, almost crazy strong. People were tired of not being able to go out and socialize and have fun, so there was a lot of pent-up demand for entertainment.

Q: What was your first event?

MK: At the Toyota Arena, it was Upland High School’s graduation, which was held on June 15. The first thing we did that attracted a big crowd was two shows in July with Banda MS, a group from Mexico, and Snoop Dogg. Those shows attracted about 16,000 people. August has been a little quiet, but once we get to September it’s really going to pick up. That’s when the sports teams start playing, and we have19 concerts booked between now and December, which is a lot.

Q: And the convention center?

MK: The convention center is doing well. In October we only have two days, a Monday and a Tuesday, that are available to be booked. We’re a little surprised by that because October usually isn’t that busy. Being a smaller venue might be helping us.

MK: Because a lot of organizations are looking to scale down their events. We’re 250,000 square feet, and most convention centers are closer to one million square feet, so we’re better suited to slightly smaller gatherings. Also, Ontario is more a business-traveler market than a tourist market, and tourism was hurt more by the pandemic.

Q: Where do you think you are now compared to where you were before the pandemic?

Sue Oxarart: I think we’re back to where we were before that, maybe even a little bit better. We lost some events at the beginning, but some of them we were able to reschedule, and we’ve landed some new ones.

Q: What’s it like going to an event at the Convention Center or Toyota Arena now?  San Bernardino County doesn’t require fully vaccinated people to wear a mask at most large indoor gatherings. Public transit, health care settings, schools, and correctional facilities are the only place where they’re mandatory. How are you handling that?

MK: There’s no social distancing at either place, but we are recommending that everyone wear a mask, which most people do. As for being allowed inside, you need to be fully vaccinated or have gotten a negative test for the Coronavirus virus, within 72 hours of the event. That’s what it says on the door and on our website. We’re trying to follow the recommended precautions, and it hasn’t kept anyone from showing up. But we aren’t checking anyone. We’re on the honor system.

Q: Are you concerned, especially with the Delta variant, that the county might force you to implement tougher guidelines?

MK: I think because a lot of what you’re hearing and reading is media hype. The press has gone crazy with it, but the Delta variant isn’t as prevalent here as it is in other parts of the country, because most people in California have been vaccinated. We’re fortunate in that regard.

Q: What if it does turn bad and there’s another shutdown?

MK: We’d survive it, but we would have to lay off more people, and that would be awful.

Q: What changes have you made to both venues that are likely to be permanent?

Q: What was the toughest thing you had to do to stay afloat?

SO: Having to lay people off. These people were like family, but we had no choice, we had to let them go. But we still had the convention center and the Toyota Arena to run, and the welcome center at Ontario Mills. So we learned new things.

Q: What did you have to learn?

SO: I had to learn social media, and how to operate the marquees at both the convention center and Toyota Arena. Fortunately, the staff was good about leaving notes and helping me. But we’re definitely going to have a new normal when all of this is over.

Q: How many people did you have to let go?

MK: We topped out at about 1,000, before the pandemic, and we got down to 17. Now we’re around 300. Our employees have been through hell and back. People in management were doing double duty. It was very bad, but now we’re looking at another challenge, which is getting people to come back to work.

Q:  Quite a few businesses are having that problem.

MK: A lot of our people aren’t coming back, maybe because they’re still getting stimulus money, maybe they want to take their life in a different direction, I don’t know, but we need them to come back. We expect to get back to 1,000 employees eventually, but we’ll have to do a lot of training.

Q: You were closed from March of 2020 to June of this year.  Besides letting some employees go, what else did you do to stay in business during the shutdown?

MK: We canceled concerts and we cut out overhead wherever we could. I think we got our electric bill down from $100,000 a month to $3,000 a month. We boarded up the building, so to speak. We were shut down for 15 months!

Q:  How do you think Sacramento handled the pandemic, from the perspective of the travel and hospitality industry?

MK: When the pandemic hit I don’t think Gov. Newsom understood the financial impact of convention centers and arenas. They’re a big part of the state’s economy. He didn’t come up with a good reopening plan. Once we did reopen I think what they put in place, the safety precautions, were very good. And they got rid of that color-tiered system, which was ridiculous.

Q: How much help did you get from your sponsor cities, Ontario and Rancho Cucamonga?

MK: They were both terrific. They were both aggressive going after the CARES Act relief funds, and that really] helped. So did the fact they were both in good financial standing when the pandemic hit.  We wouldn’t have made it through all of this without them.

We’re glad to provide the Inland Empire with the IE Business Daily Top Lists, a …