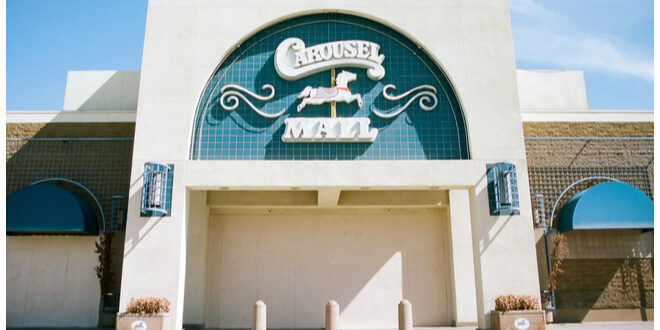 Mayor John Valdivia wants to level the abandoned shopping center, and he hoped a three-alarm fire on the property last month would persuade his fellow council members to take that action, on the grounds that the site has become a health hazard. But that idea went nowhere, and city officials are no closer to fixing the downtown property next to Interstate 215.

San Bernardino still can’t figure out what to do with the Carousel Mall.

Following a three-alarm fire at the empty shopping center last month Mayor John Valdivia renewed his calls to demolish the downtown structure, calling it a health hazard and a drain on the city’s coffers.

“There have been about 30 service calls to the [Carousel Mall] property during the last six months, and a few of those were fires,” said Valdivia, who calls himself a “strong advocate” for leveling the 43-acre site next to Interstate 215.

“It’s also costing us about $600,000 a year to maintain, which is a lot of money to spend on vacant buildings. That’s what I’m interested in doing, removing an eyesore from downtown and saving the city $600,000.”

Valdivia raised the matter at the June 1 council, two weeks after three-alarm fire. He urged his fellow council members to speed up demolition – the property and former mall are owned by the city – but to no avail.

Only Councilman Juan Figueroa supported the proposal, causing Valdivia to deplore the “do-nothing” council. That was not the first time he has used that label to describe his colleagues, and he stands by it.

“I think people support demolition,” said Valdivia, who will leave office in December after serving one four-year term, having finished third in the June 7 primary election. We had a discussion about it [June 1], and nothing has happened since then, and nothing is scheduled to happen. It died on the spot.

“There is no leadership on this council.”

The debate regarding whether to accelerate the razing of Carousel Mall is the latest in a series of false starts and missteps related to the former shopping mall, which opened in the fall of 1972 as Central City Mall.

The two-story development performed well at first, but it began losing sales by the early 1980s, much of it to San Bernardino’s other regional shopping mall, Inland Center Mall, which opened in 1966.

Besides becoming a gathering place for gangs, the mall underwent a series of management companies, and various revitalization plans that did not happen. In 1991 the mall changed its name to Carousel Mall after a children’s carousel was installed on its lower level, but by then the decline was probably irreversible.

Converting some of the space to office tenants didn’t help, and by 2003 the mall had lost its three anchor tenants: Harris-Gottschalks, Montgomery Ward and JCPenney. It shut down in the summer of 2017.

In March 2021, the city hired a development team, Renaissance Downtowns USA/ICO Real Estate Group, to come up with a redevelopment plan for the Carousel Mall property. Negotiations are continuing, but both sides have agreed that all of the buildings on the site should be demolished, said Councilman Theodore Sanchez.

But leveling such a large property takes much study and planning, which is one reason why the council rejected Valdivia’s suggestion to speed up the process, Sanchez said.

“The plan to demolish has always been fluid, and we’ve never made it official,” said Sanchez, who represents San Bernardino’s first district, in which the Carousel Mall is located. “The plans have been shifting around. I think everything is on the table, but I don’t think you’ll see ground broken, or anything significant happen there, for at least five years.”

More than anything, San Bernardino needs to revive its downtown – probably the city’s top priority – and upgrading the Carousel Mall property will be a major part of that process, according to Sanchez.

“I think everyone agrees that we need an economic driver there,” said Sanchez, who was reelected June 7. “I want something that brings in 50,000 or 60,000 people every day, like a school campus. I want a crowded downtown that will support businesses.

The owner of an office building next door to Carousel Mall – the Enterprise Building at 320 N. E St., a 70,000-square-foot office structure that its fully leased – said he believes the city is making a good-faith effort to restore the mall property.

“I have a positive outlook about the Carousel Mall, and I believe in the direction they’re going,” said Alan Stanly, a San Marcos resident who has owned The Enterprise Building since 2017. “From a business perspective it’s an enormous asset. It’s a great location.”
But, like Sanchez, Stanly believes it will be difficult to develop anything on the mall site anytime soon.

“It will take two to five years to develop anything if they choose demolition, primarily because of environmental issues,” Stanly said. “There was an auto repair place there before the mall, so there could be groundwater issues, and there’s asbestos in the buildings. Plus, you have to deal with California’s environmental laws, which are very complex, before you can build anything.”

The mall, which is no longer surrounded by a fence, is a threat to public safety that needs to be removed as soon as possible, according to Valdivia.

“We have to do something in order to avoid a cataclysm, like a firefighter or a homeless person getting killed,” Valdivia said. “But the council is floundering and it doesn’t know what to do. If you do what’s right, it’s a good thing for the city and everyone wins.”